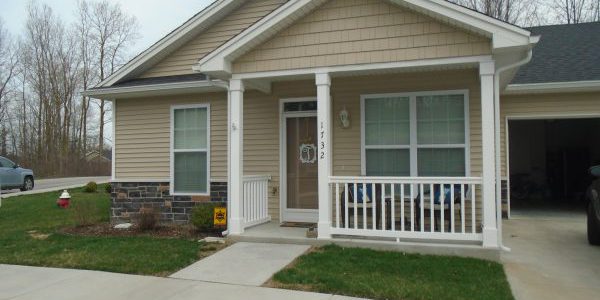 A joint lawsuit filed by The Fair Housing Center, The Ability Center, and Brooklynn Park resident Jenny Tillman alleges that Brooklynn Park Villas, a 55+ housing community in Toledo, Ohio, was falsely marketed as accessible but exhibits glaring violations of The Fair Housing Act. The lawsuit filed in the U.S. District Court for the Northern District of Ohio accuses Moline Builders, Inc., JLJ Development, Inc., Larry L. Fast, and James Moline of discriminating against persons with disabilities by failing to comply with federal design and construction regulations for accessible housing. With negligence and reckless indifference, the property’s builders continued to violate the law even after being fully informed of their lack of compliance. The Plaintiffs are represented by in-house counsel Katherine Hunt Thomas from The Ability Center, Christina Rodriguez from The Fair Housing Center, and Stephen Dane, Jia Cobb, and Sara Pratt from Relman, Dane and Colfax, PLLC, a civil rights law firm based in Washington, D.C. with offices in Ohio and New Mexico.

Due to the false representations of the property’s accessibility, resident Jenny Tillman found herself living in a home that did not meet her needs, could not be fully utilized or enjoyed, and posed serious risks to her health and safety. The step at Ms. Tillman’s front door prevents her from entering or exiting through her unit’s primary entrance, and she has injured herself bumping into objects in her bathroom because the area was designed without sufficient space to be easily navigated by a person with a disability. A steep slope leading to the community’s clubhouse renders it inaccessible, preventing her from enjoying this amenity. Ms. Tillman made Moline Builders and JLJ Development aware of her accessibility issues, but her repeated requests and complaints were either denied or ignored. Continuing to live in an inaccessible home, she has suffered a loss of property value since her home does not contain the accessible features that were falsely claimed when the home was marketed to her.

“Having lived with MS for 25 years, I bought my home thinking about my future. After moving in and living in my home, it became clear it was not accessible to me or others in this community,” stated Jenny Tillman, Brooklynn Park resident. “The step at my front door can be difficult for me, so often I can’t even use my main entrance and have to enter the house through the garage. I asked the builder many times to make changes to make it accessible but I was told, ‘You bought it this way.’ I intended for this home to be my last home for this last chapter of my life, but instead I was taken advantage of.”

“Providing housing that blatantly disregards accessibility standards has endangered the safety and livelihood of more than 100 residents, many of whom are seniors or people with disabilities,” stated Michael Marsh, President and CEO of The Fair Housing Center. “Nearly half of fair housing cases are based on disability discrimination and we have a large aging population. These members of our community are guaranteed the right to live in homes that they can fully use and enjoy, and fair housing protects that right. Accessible housing is vital to create a diverse and inclusive community where people with disabilities feel welcome and have the opportunity to thrive.”

“Our current lack of integrated, accessible housing is a major barrier to people with disabilities’ ability to live independently in inclusive neighborhoods,” stated Katherine Hunt Thomas, Attorney for The Ability Center. “When developers fail to comply with the minimal access standards set by federal law, people with disabilities are often forced to choose between unsafe, inaccessible housing and segregated, institutional settings.”

The Fair Housing Act requires builders, owners, and anyone involved in the design and construction of multi-family housing to ensure properties do not contain architectural barriers that impede access or exclude individuals with disabilities from residing in and visiting the properties. This requirement applies to all newly constructed multi-family housing with four or more units built after March 13, 1991. During an extensive investigation at Brooklynn Park, The Fair Housing Center and The Ability Center discovered numerous violations of accessibility requirements, both in individual units and in common use areas. For example, many entrances contain steps; walkways are impassable due to steep slopes or lack of curb cuts; environmental controls, mailboxes, and other amenities are located out of reach; and kitchens and bathrooms do not provide sufficient clear floor space to be usable by persons with disabilities. A more complete list of accessibility violations can be found below.

The Fair Housing Center’s attempts to establish a cooperative relationship with Moline Builders were dismissed or ignored. In June 2016, the two parties met and The Fair Housing Center shared the results of their findings, conducting a walk-through of the property to identify accessibility violations. Moline Builders was made explicitly aware of the ways Brooklynn Park did not comply with fair housing regulations, and The Fair Housing Center provided suggestions for modifications that would bring the properties into compliance and provide relief for current residents. Because Moline Builders planned to build additional units at Brooklynn Park, The Fair Housing Center also requested that the design flaws not be repeated in the newly constructed dwellings. Fully aware of the violations, and provided with the necessary information to correct them, Moline Builders proceeded to build additional units at Brooklynn Park that exhibited the same accessibility obstacles. “The fact that the builders knew about the problem and did nothing to resolve it or prevent it from happening again shows their reckless disregard for creating truly inclusive housing that is accessible to all,” commented Mr. Marsh. “If we don’t hold them accountable, it gives a green light for other builders to ignore the law.”

The problem may extend beyond the Brooklynn Park property; Moline Builders and JLJ Development are responsible for many currently existing as well as newly planned developments that may exhibit similar accessibility violations. Each time they construct and sell dwellings that do not comply with The Fair Housing Act, they are not only discouraging people with disabilities from living in their properties, it also encourages other developers of multi-family dwellings to disregard their own responsibilities and perpetuate the problem. The lawsuit demands that Moline Builders and JLJ Development evaluate all current and future properties to ensure compliance, and to make appropriate modifications to correct any inaccessible features.

Plaintiffs demand a trial by jury, compensatory damages for injuries and losses resulting from discriminatory practices, and punitive damages to punish the Defendants for malicious and recklessly indifferent conduct and to deter similar conduct in the future.

Public and common use areas at Brooklynn Park do not have:

Interior units at Brooklynn Park do not have: