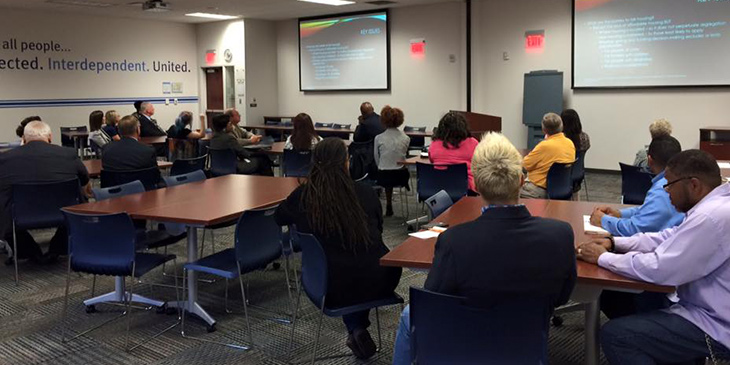 The Fair Housing Center and the City of Toledo Department of Neighborhoods partnered to host the Fair Housing Implementation Council (the Council) Kickoff. The event was held on Friday, September 25, beginning with a news conference at The Fair Housing Center at 10 a.m. and followed by the Council kickoff at United Way of Greater Toledo, located at 424 Jackson St., Toledo, OH 43604, Rooms A&B. Approximately 50 stakeholders from across the community attended, including representatives from local government, nonprofit, and the housing industry, as well as community members and advocates. By forming a collaboration across key sectors, the Council aims to effectively address barriers to fair housing in our community and increase participation in the Fair Housing Action Plan.

Every five years, The Fair Housing Center and the City of Toledo develop a Fair Housing Action Plan (Action Plan). In an effort to address barriers to fair housing, the Action Plan identifies impediment areas that may inhibit one’s access to housing of their choice. Examples of such barriers include transportation, reentry after incarceration, homeless services, foreclosure, and public policies. Each impediment area contains corresponding goals and actions steps designed to overcome the impediment. “This is a comprehensive strategy to expand housing opportunities in the City of Toledo,” explained Michael Marsh, President and CEO of The Fair Housing Center. “Our goal is to broaden this to a regional effort, and we invite other communities in our area to partner with us to develop ways to ensure equal access to housing and, therefore, access to opportunity.” Bonita Bonds from the City of Toledo Department of Neighborhoods commended The Fair Housing Center for setting the example for other communities, stating, “Our Fair Housing Center is way ahead of the game compared to other jurisdictions.”

One of the goals of the Council is to advocate for legislative changes necessary to provide protection for source-of-income, currently not recognized as a protected class. While attempting to rent a house with his wife, Mr. Tucker encountered a landlord who had previously refused to rent to a tenant receiving housing assistance and who denied Mr. Tucker the opportunity to rent once she discovered he had previously lived in public housing. Having his security deposit returned to him, Mr. Tucker realized the landlord was considering factors aside from his ability to pay rent. “We thought, this isn’t right. We’re trying to make a better life for ourselves,” Mr. Tucker commented. Although an investigation was conducted, The Fair Housing Center was unable to file a complaint because source-of-income is not a protected class. “It’s important to recognize that many people have nontraditional means of income: social security, disability or military benefits, child support, or housing choice vouchers (public housing assistance). As long as a person can prove their ability to pay, it shouldn’t matter where the money comes from, and they shouldn’t be denied the right to housing,” explained Marsh.

A regulation issued by HUD in July reminds communities of their responsibility to Affirmatively Further Fair Housing, or proactively take steps to promote diversity and integration. Beyond simply prohibiting discrimination, jurisdictions receiving federal funding are required to actively take steps to develop inclusive policies and overcome historic patterns of segregation. “This partnership represents the City of Toledo’s commitment to expanding housing opportunities, and we are grateful for their support,” said Marsh. “But in order to achieve broad impact, we need other communities to come to the table. We have already met with the Lucas County Commissioners and the City of Oregon and look forward to joining them and other local areas to ensure members of our community have the chance to be successful.”

The Council is a means to help implement the Action Plan by plugging community partners into appropriate areas where they can effect change. Today’s kickoff included the formation of separate committees to focus on each impediment area. Committees plan to meet on a quarterly or as-needed basis, while the full Council will only meet a few times a year.